This enables site visitors to quickly appreciate how Headwall’s range of products correspond with specific demands for data capture, management and analysis.

PAS is excited about the benefits of the new site for our customers who may be time-poor, overloaded with information and working on a deadline.

One valuable page on the new site is Published Research which catalogues selected scholarly articles demonstrating some of the myriad of applications for spectral instruments.

“These papers describe just a sampling of the fascinating applications using Headwall’s hyperspectral and multispectral imaging sensors,” the page reads. “From remote sensing and medical/biotech to cultural preservation and food inspection, Headwall is THE industry leader in spectral imaging solutions.”

PAS has been the Australia / New Zealand distributor of Headwall spectral imaging including the award-winning Hyperspec® instruments since 2013. We provide sales support, service and training for these application-specific, rugged and versatile analysers.

For a wide range of critical applications, the combination of airborne hyperspectral with ground-based non-imaging hyperspectral radiometers represents the optimal solution. A comprehensive white paper on the topic, written by Headwall Photonics and ASD Inc, part of Malvern Panalytical, is one of many available from PAS for your reference. The paper offers excellent background and specific examples of applications, procedures and results.

The worldwide precision agriculture industry is vital on so many fronts because countries depend on the revenue derived from citrus, wine-grapes, nuts and other specialty crops. Also, famine relief is the byproduct of successfully planting and harvesting crops in harsh and unforgiving climates.

Hyperspectral imaging is playing an increasingly large role here because economic and life-sustaining decisions need data that is precise and actionable. Yet, while hyperspectral images contain a wealth of data, accurate interpretation of the image requires first-hand familiarity of the surface being analysed.

In the absence of ground-truthing, remotely sensed image analysis and classification is really no more than an inference or assumption regarding earth surface conditions no matter how spatially or spectrally resolute the source image happens to be.

Ground-based reference measurements can be used to verify airborne hyperspectral data, which means the combination represents a powerful solution for the remote-sensing community. As leaders in their respective areas, Headwall and ASD understand the relationship between ground-truthing and hyperspectral.

A fundamental research need in leafy spurge and invasive plant management as a whole is cost-effective, large-scale mapping of plant populations. Hyperspectral airborne data was acquired over a

25-square-mile study area in Crook County, Wyoming. ASD’s FieldSpec spectroradiometer collected ground calibration and reflectance data of leafy spurge, other vegetation and soils. These spectra were used to perform spectral mixture analysis on the hyperspectral scene. A major advantage of this technique is that it can effectively unmix a pixel and provide an estimate of the real extent of leafy spurge within the pixel.

To further explore these techniques and your specific application, talk to the team at PAS in Australia or New Zealand.

When UNESCO reported last year that the world’s coral reefs were likely to disappear by 2100, many Australians saw the need for immediate action.  Thanks to cutting-edge analytical methods, scientific coastal exploration is well-advanced in understanding this critical problem.

QUT scientists have clear vision of environmental changes in the coral, scanning 40 hectares of Ningaloo Reef, the largest existing fringing reef in the world, in only 30 minutes,100 metres above the surface, providing data to retain the health of the reef which hosts numerous marine species. 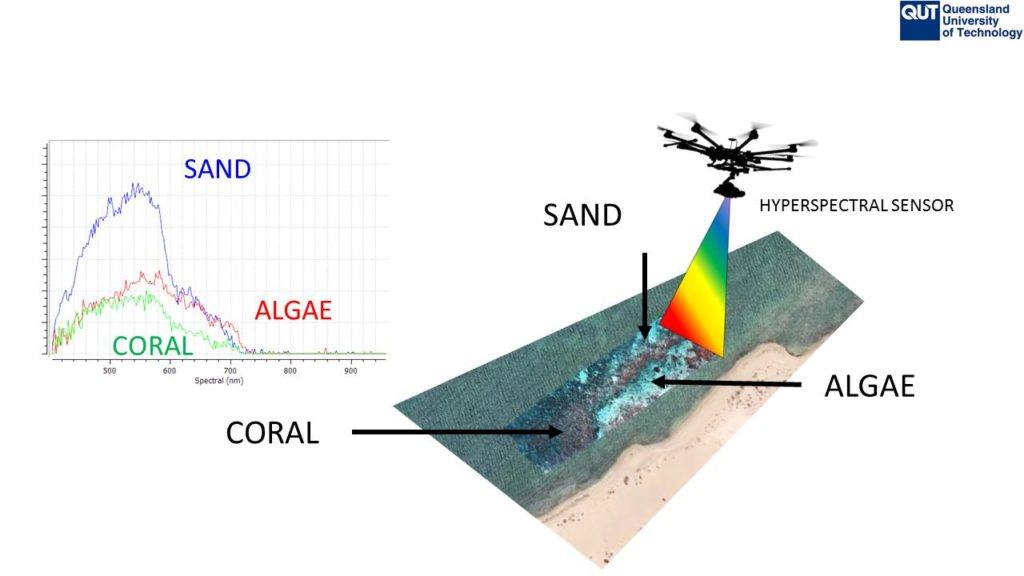 According to media coverage, lead researcher Associate Professor Felipe Gonzalez said the data would help build a fingerprint of the reef, showing coral, sand, algae and other species.

“If the coral is healthy or unhealthy it will show the difference,” he said.

With its compact size and weight, the Hyperspec® sensor suits newer multi-rotor and fixed-wing UAVs, the preferred platform for mounting scientific sensing instruments due to their tactical efficiency.

Coastal Exploration beyond the limits of human vision

Hyperspectral sensors can see well beyond the limits of human vision, which runs to about 700 nanometers (nm). Many research projects demand the ability to see into the infrared ranges, often up to and beyond 2500nm.

With such precise vision, it is possible to detect the early signs of stress and disease on coral, vegetation and crops, with enough time to mitigate the problem. The use of imaging in the infrared ranges optimises scientific learning about coastal exploration, geological deposits and climatology and many other applications.

Sensors might collect literally hundreds of spectral bands per pixel, meaning the amount of useful data is enormous.

Speak to PAS and explore the possibilities of hyperspectral vision for your industry.